Ten days ago I went on a knitting shopping spree.  My wallet is definitely lighter, but despite having a fair number of non-knitting projects requiring my attention, I actually have something to show for it already.

First, I finished my Dr. Who type scarf in Stonehedge Mill Ends (called Stonehedge Crazy at Green Planet Yarns for those who've asked).  I love this yarn:  it is constructed from random length (from 3 to 20 yards) mill ends that have been respun into single plies, then those single plies are made into a two ply worsted weight yarn.  One caveat is the balls vary quite a bit in weight (my four ranged from 74g to 89g).  The scarf is a simple garter stitch diagonal construction (SSK the first stitch, K f/b the last on every other row).  It ended up being 5" wide and over 9' long.  I used two skeins totalling 150g. 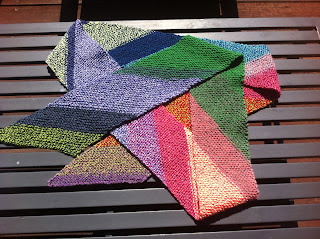 Next, I knit a Birthday Cake cowl from an 84g skein.  This particular ball had less color variation than most, and, amazingly, the color changes mostly happened right along the purl ridges.  Finished size is 9 1/2" high by 30" circumference. 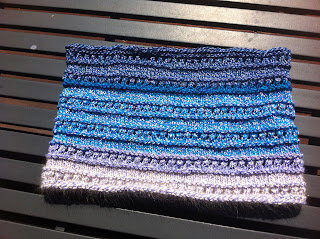 I took a break from the Stonehedge Mill Ends to knit a Honey Cowl in Lana Bambu.  One skein used and the finished size is 8" high by 29" circumference.  The sun is a bit too strong right now, but the cowl actually has some glints of pine green in among the grays and deep rose. 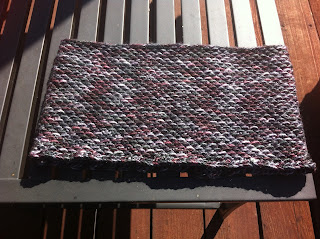 My last ball of Stonehedge Mill Ends is also destined to be a cowl, this time the Orbs Cowl from the Knitscene Accessories that recently came out.  I started this last weekend and ripped it out after deciding (a) I didn't like how the decreases weren't mirrored (side by side k2tog instead of ssk next to k2tog) and (b) I probably wanted to make it the original 6 repeats instead of 8 that I had cast on for.  If I have finally figured out what this yarn wants to be, I expect to have another cowl done sometime this weekend.

That's four FOs in two weeks -- not bad for someone with knitter's ADD!

Of course, there ARE all those projects requiring just a bit more time and concentration waiting for me to give them the attention they deserve...

Better stop patting myself on the back and get back to work!  (Okay, back to the fun stuff!)
Posted by Jamie Wang at 11:26 AM

I love Stonehedge yarn! It's the softest stuff! A pleasure to knit and wear. I need to go to GPY and check this out! Lovely FO's!