Pre-Xmas Knitting Flurry, plus a Look Back on 2012

Even though I planned ahead and knit many gifts in advance, somehow I found myself in the position of "needing to" knit a number of last minute gifts.  We decided to splurge and go to the Rose Bowl this year, and since we drove through the Central Valley to see my family, we also decided to meet up with my BFF Sloan and her family.  I always have a gift ready for Sloan, but decided I really should have something for her husband and each of her kids, so one more cowl and 2 beanies were knit.  As long as I was knitting beanies, I decided to knit my boys each one.  I also knit more feminine ones for my niece Amanda and Alex's girlfriend Anna (Anna also got a cowl to match).  Then there were my sister-in-laws Joyce and Karen, who both got cowls.  Somehow, I ended up with a few extra for my futures pile.

Here are the gifts:


I got a bit of holiday decorating fever and knit a small grove of trees from leftovers from the extra cowl. 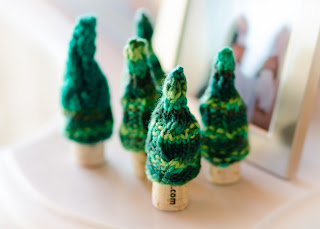 I also made a few things for myself:  socks (the second pair is almost done), mitts, and a hat.

I started a few scarves in the past month or so that did not get finished.  One is in handspun alpaca and is in its second iteration of a lace pattern.  The other is doubleknit (like the hat for Amanda) and I've gotten about 10" into it (more than the photo).  This will just take a LONG time, but I think it will be worth it. 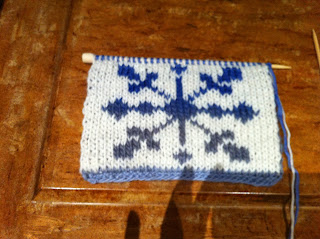 In total, I finished 78 knitting and crochet projects this year.  That's a bit more than my average, but I also finished fewer sweaters than usual (although a few of the shawls and scarves were almost as time consuming as an adult sweater).  Here's the breakdown:

Of those, I gave away 31 to charity or friends and family.  I also gave away over a dozen more items to charity that I had knit in prior years.

Wow you were very productive in 2012. I'm excited to see what you bust out this year :)