Long time, no post (or life intervened, but knitting continued)

Many times when it is this long between posts (nearly three months), I have been hiding my head in shame that I have not been more productive knitwise.  This time around though, I have been busy with knitting whenever my life allowed.

Joe and I have been dealing with the complications that arise as our parents age (all four are over 80).  Two of our parents entered the hospital within hours of each other in mid-May.  One passed away after a month of slow decline, and the other has moved to assisted living after two months of only partially successful rehab.  It has been excruciatingly painful to watch our healthier parents struggle with the changes in their lives, especially since they want to/need to make the decisions and realizations at their own pace.

Life, of course, does not slow down for those of us in the sandwich years.  In May, my son's high school held its annual benefit; I was the treasurer and am still tracking down stray pledges, expenses, and other accounting niceties.  I also did a fair amount of work for local nonprofits, although I did occasionally bag out in order to deal with ailing parent issues.  Joe's work project has been moving along at a breakneck speed, and our kids have been busy with careers and school.  We are also in the midst of a major relandscaping project that has been sucking up a lot of my time (the photo below is from early May). 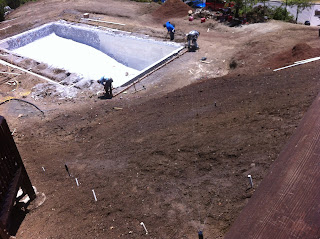 Frequent family dinners and knitting helped keep me sane through all this.  I finished the scarf and socks mentioned in my previous post along with a cowl from Noro Nobori, then plunged into serious project making mode a few days into May.  I had received notice from Classic Elite that they were having a contest to see who could make the most projects fitting a variety of criteria between January 1 and June 30 of this year (the email went out in April).  They had a bingo card with 16 squares that one could fill out; by June 30, I had started and completed 15 projects (and started two others fitting the criteria).  Pictures are below of a sampling.

In July, I have started a mystery shawl knitalong run by Wendy Johnson.  As of today, I am up to date with it.  I've also almost gotten half a cardie knit from Sprout (the last box on my CE bingo card).