In which math failed me and all seemed lost

I did some serious shopping at the Labor Day weekend sales this year, including buying two balls of Noro King for a shawlette.  My basic geometry rule for right triangle shawls knit from the center neck outward is each successive ball of yarn will create half as many rows as its predecessor.  This was a basic garter stitch shawl:  cast on 3 stitches provisionally, knit 3 garter ridges, pick up 3 stitches from one side, pick up the 3 cast on stitches, and knit every row (right side rows are increased a few stitches in from the each end and on either side of the center stitch, wrong side rows are knit plain). 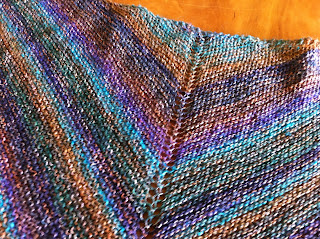 The shawlette was progressing quite well.  It became clear after I had started ball number two that blocking could be a challenge due to fiber content (it is only 20% wool and not particularly stretchy), so I decided to instead  bind off with a garter lace edging that was knit sideways.  I calculated the number of stitches needed for the edging and worked backward from my calculated total row count to come up with my new bind off row.

Just to be safe, I stopped two rows early to give myself extra yarn.  I also made the edging a few stitches narrower for the same reason.

I ran out of yarn with less than 6" of edging left to complete. 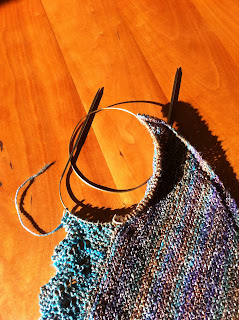 The only thing I could figure out might have happened is that Noro is sometimes less than precise in its windoffs (I once bought a ball of Silk Garden Sock that weighed 82 grams), and maybe ball #2 had less yarn than #1.

I returned to Yarndogs to buy another ball (they had several more when I left the sale), but they were all sold out. 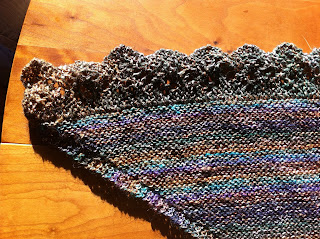 I decided to search the net for other balls of this colorway of King.  Turns out it is fairly uncommon, but Webs had a few balls.

I bought the two balls (thinking the leftover could be a scarf) and was pleasantly surprised when they arrived.  The colors looked very similar to what I had, and I was able to finish the shawlette quickly. 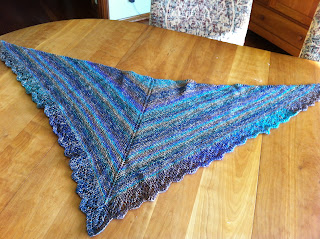 I only noticed after I finished that they were the same dyelot.  Massachusetts and California -- what is the likelihood of that?
Posted by Jamie Wang at 9:23 AM